A BIT ABOUT ME

While in my teens, my family moved to Orangeburg, South Carolina, where I graduated from high school. I was fortunate to receive a scholarship to attend Vanderbilt University, and after graduation, was commissioned as a second lieutenant in the United States Marine Corps. I served initially as an infantry officer, and later, after receiving a law degree from George Washington University, I served in various legal assignments— prosecutor, defense counsel, appellate counsel, and for five years, a military trial judge.

After I retired from the Marine Corps, I became a prosecutor in Florida, and a short time later, a law professor at Stetson University College of Law. There I taught criminal law, trial advocacy, and evidence, and directed the prosecution clinic. (While on a sabbatical, I earned an LL.M. in Litigation from Emory University (thanks, Stetson; thanks Emory!).

A few years ago my wife and I bought a small plot on a hillside in the Smoky Mountains of North Carolina to build a home. I served as the contractor, pulling the permits and hiring the workers, and about a year later we moved in. We are there in the summer and fall, but when the frost gets thick on the pumpkins, we (cowardly) head back to our permanent home in St. Petersburg, Florida.

If you like legal thrillers and haven't read my four novels, Savannah Law, The Indictments, The Two-Witness Rule, and The Colosimo Trial, you are in for a special treat. It may be best to read Savannah Law first, as the other novel are sequels (although each can be read as a stand-alone also).  So if you have a choice, start with Savannah Law, but I think you'll find each a "good read," in any order! They all share the same genre, "legal thrillers" and the same local, beautiful, and inspiring Savannah, Georgia. 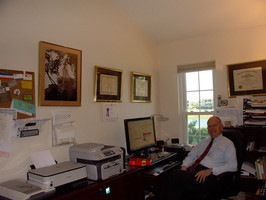 That's me, taking a break

I appreciate hearing from readers. Please don't hesitate to contact me at wreleazer@GMAIL.COM.