Savannah Law is a novel about the law, jury trials, lawyers, law schools, and law students. A young law professor's obsession with a female student and a politically-charged, media-frenzy criminal trial that pits Max Gordon, the nation's most successful criminal trial lawyer against Savannah prosecutors provide the backdrop for Savannah Law.
After Gordon arrives in Savannah for a high-profile criminal trial, the lives of Gordon, the young professor, and his student become intertwined in a whirlwind of drama, both inside and outside the courtroom. The trial becomes a media frenzy, and the suspense and intrigue of the trial and its aftermath build to a surprising climax that changes the lives of all involved forever.
Savannah Law is filled with colorful, yet believable, characters, including a few cantankerous law professors who demonstrate their vanity and eccentricities at the weekly faculty meetings. You will find pure reading enjoyment as the students, professors, and trial attorneys come alive in the beautiful and historic city of Savannah. ISBN 978-0-982447-6-1. Softcover, 360 pages.

The Indictments
A brazen robbery by a masked man at one of Savannah's finest restaurants results in the murder of a teenage girl and murder indictments against two defendants. The assistant DA assigned to the case believes one indictment is without merit, and his attempt to have it dismissed threatens both his career and his life. With colorful characters and exciting and realistic courtroom drama, The Indictments will keep the reader riveted in the twisting plot until the unforgettable final chapter.
The Indictments is a sequel to Savannah Law and brings back Scott Marino, the young assistant DA, to once more face ace defense attorney Max Gordon in a Chatham County courtroom. With beautiful Savannah as the locale, this legal thriller will give you many hours of enjoyable and exciting reading. ISBN 978-0-9824747-8-5, softcover, 332 pages.

The Two-Witness Rule  (2017 Finalist, Regional Fiction, Next Generation Indie Book Awards)
Assistant DA Scott Marino has been assigned a tough case—the prosecution of Max Gordon, one of the nation’s most prominent attorneys, accused of paying witnesses to commit perjury in a Savannah criminal trial.
Some crimes are just different. One witness is sufficient to prove most crimes— even murder––however for perjury, the “two-witness rule” applies. But Marino is challenged by more than this unique rule. He must prosecute a cunning lawyer, defended by another just as crafty. He wants Max Gordon put away for years, but with the stakes so high, he faces threats to his integrity and his life as he prepares for the biggest trial of his young career.
The Two-Witness Rule was my third novel, and of course, all the action occurs in my favorite city, Savannah. The trials will take place once more in the Chatham County Courthouse, and readers of Savannah Law and The Indictments will have the opportunity to again meet and cheer on their favorite characters as well as jeer the villains. ISBN 978-0-9824747-1-6, softcover, 247pages.  (You may be able to read the first chapter free on the Amazon.com website.)

James Colosimo, who prefers to be known as “Diamond Jim,” is one of Atlanta’s most prominent criminal defense attorneys. After successfully defending a high-profile case in Savannah, he is now back in that beautiful city for another trial—this time as the defendant, accused along with two other members of his law firm of influencing witnesses and conspiracy. Prosecuting the case is the same young assistant DA he faced the last time he was in Savannah, Scott Marino. The courtroom scenes are realistic, with all the excitement, tension, and intrigue that goes with the most notorious criminal trial. And along the way, you may attend the wedding of Scott and his long-time girlfriend, Jennifer—unless his nemesis, Jessica, gets in the way. 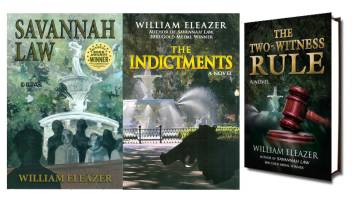 I appreciate hearing from readers. Please don't hesitate to contact me at wreleazer@GMAIL.COM.